Ehrlichia, named for the Dr. Ehrlich who first described them, are a type of bacteria that infect and live within the white blood cells of their hosts. Different types of Ehrlichia live in different types of white blood cells. Hosts can be human, pet, or wild animals. Ehrlichia are spread from host to host by tick bites and their intracellular location makes them difficult to remove as most antibiotics do not penetrate to the inside of cells.

The two Ehrlichia of concern are Ehrlichia Canis and Ehrlichia Ewingii

If your dog has been diagnosed with Anaplasmosis, read that article instead of this one.

Ehrlichia canis infection is a worldwide disease (possibly excluding Australia). In the U.S., it is spread by the bite of the brown dog tick (Rhipicephalus sanguineus). It is unknown how long the tick needs to remain attached to transmit the Ehrlichia infection but it is important to realize that that this tick can transmit other tick-borne infections (Babesiosis, and Rocky Mountain Spotted Fever) so infection with multiple organisms are not unusual. It can be difficult to separate which symptoms goes with which tick-borne infection.

In the 1980s it became clear that people could also be infected by Ehrlichia, though not the same Ehrlichia as for dogs. When the human disease was recognized, research intensified.

When Dogs Get Sick: Ehrlichia Symptoms

There are three phases of illness with Ehrlichiosis: acute, subclinical, and chronic.

Acute Phase
This phase occurs 1 to 3 weeks after the host is bitten by the tick. The Ehrlichia organism is replicating in this time period and attaching to white blood cell membranes. During the acute infection, the platelet count will drop and an immune-mediated platelet destruction will occur. The dog will be listless, off food, and may have enlarged lymph nodes. There may be fever as well but, though the dog may seem pretty sick, this phase of infection is rarely life-threatening. Most dogs clear the organism if they are treated in this stage but those that do not receive adequate treatment will go on to the next phase after 1 to 4 weeks.

Subclinical Phase
In this phase, the dog appears normal. The organism has sequestered in the spleen and is essentially hiding out there. Dogs can stay in this phase for months or even years. The only hint that Ehrlichia is hiding is a somewhat reduced platelet count and/or elevated globulin level on a blood test. The blood protein level on a lab report is divided into albumin (an important carrier protein) and globulins (every other blood protein including antibodies.) Long-term stimulation of the immune system will elevate globulins, sometimes dramatically. Not all dogs ever progress to the chronic stage but when they do, the prognosis is worse.

Chronic Phase
In this phase the dog gets sick again. Up to 60 percent of dogs infected chronically with Ehrlichia canis will have abnormal bleeding due to reduced platelets numbers. Deep inflammation in the eyes called uveitis may occur as a result of the long-term immune stimulation. Neurologic effects may also be seen. Glomerulonephritis, resulting in serious urinary protein loss, can also result. Increased globulin levels are almost always seen in this stage, albumin is often low. Most dogs in the U.S. do not show the full pancytopenia (literally reduction in all blood cell lines) but severe cell deficiencies are associated with high mortality rates. 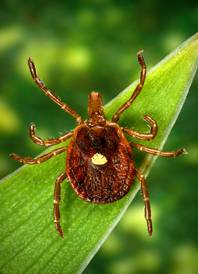 Ehrlichia ewingii is a different species of the Ehrlichia genus. It infects the white blood cells known as granulocytes as described at the top of the page and is not generally as serious as Ehrlichia canis. Dogs are usually only mildly ill or even inapparently infected but classically symptoms revolve around swollen stiff joints/arthritis and fever.

Ehrlichia ewingii is spread by the bite of the lone star tick (Amblyomma americanum) as pictured on the right.

How the Diagnosis is Made

Of course, if one is lucky the organisms will be seen on a blood smear, which clinches the diagnosis.

Antibody Testing
Traditionally, when Ehrlichiosis is suspected, a blood test for antibodies against Ehrlichiaorganisms can be ordered. A positive test indicates that the dog has been exposed to Ehrlichiaand does not imply active current infection necessarily. A negative titer does not fully rule out Ehrlichia, either, as a very sick patient will be too sick to produce antibodies and an early case may not yet have started to produce antibodies.

The antibody level or titer can be done with an IFA (immunofluorescent antibody) or by ELISA (enzyme-linked immunosorbent assay). The IFA test is the traditional test and can be positive 7 to 28 days after the dog has become infected and actual number (antibody titer) is reported by the laboratory.

Alternatively, a test kit for Ehrlichia can be run while you wait, if your veterinarian’s office is so equipped. These tests are accurate but only produce a positive or negative result so it is not possible to see how an antibody level is changing.

It takes 6 to 9 months after infection for titers to begin to drop. Antibodies against Ehrlichia canis and Ehrlichia ewingii will cross-react so it is not easy to determine which organism a dog has been exposed to.

PCR Testing
Recently PCR testing for Ehrlichia DNA has become available. Commonly a laboratory will offer a tick panel that uses PCR testing to screen for a group of classic tick-borne diseases.  PCR testing remains positive for several weeks after infection has cleared as PCR testing does not distinguish between live and dead organisms. It takes time to clear dead organisms from the body.

Despite being one of the oldest antibiotics in use, tetracycline is probably the most effective against Ehrlichia (and any other intracellular blood parasite for that matter). Doxycycline, a more modern and much more available derivative, has a more convenient dosing schedule and has become more popular. Expect at least a month of treatment to be needed. Response is initially rapid (improvement is notable in the first few days). Dogs in the acute or subclinical stage at the time of treatment can expect to be cured. A common protocol involves 28 days on doxycycline and a PCR test 2 weeks post-treatment. If the test is negative then another final PCR test is done in 2 months. If the post-treatment test is positive, another 28 days of doxycycline is used and a 2-week post-treatment PCR is repeated. If this second post-treatment PCR test is still positive, another medication (such as chloramphenicol or imidocarb) should be used.

If immune-mediated secondary reactions to the Ehrlichia are a problem (such as immune-mediated arthritis, or immune-mediated platelet loss) corticosteroids such as prednisone can be used to palliate the situation while the antibiotics are starting to work.

Dogs in the chronic stage are more difficult to treat as they are sicker and more debilitated. Blood transfusion may be needed and mortality rate is much higher.

Surviving dogs can become re-infected as Ehrlichia immunity is not life-long.

Dr. Bennett's goal is to provide quality mobile vet care in the security of your pet's home, thereby eliminating the fear and anxiety your animal may experience by traveling to a veterinary clinic. Dr. Bennett's mobile coach arrives at your residence and offers a variety of outpatient services such as in-home euthanasia, dental cleanings, vaccines, minor injury, medical evaluation, diagnostic testing, surgery, and wellness.